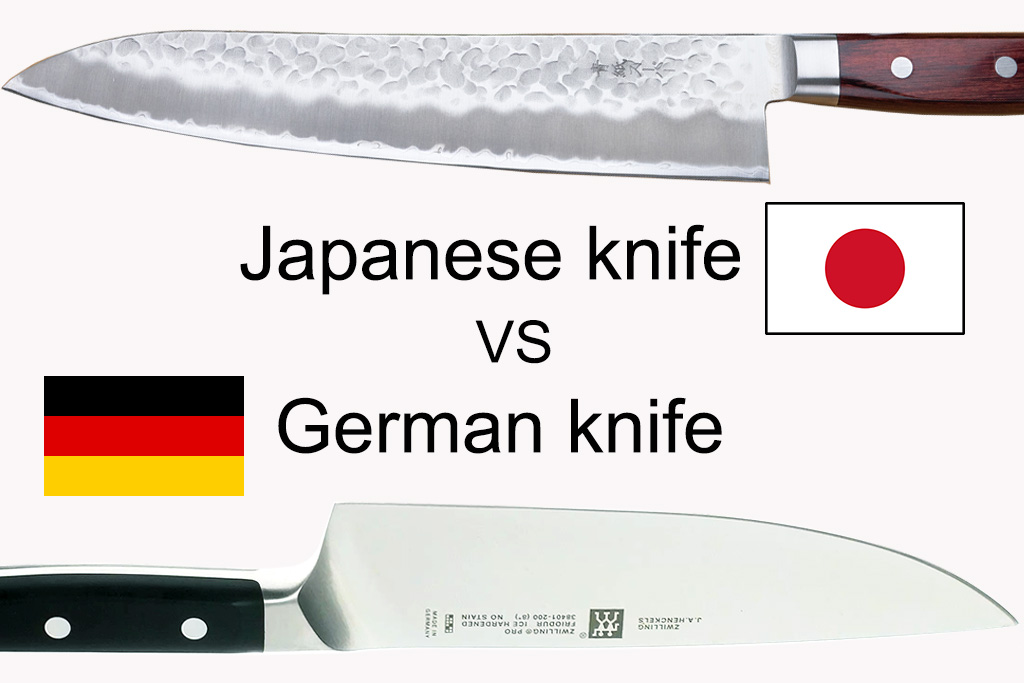 WHY JAPANESE KNIVES ARE BETTER THAN GERMAN

September 30, 2021 0 Comment(s)
For many years, Japan and Germany have been considered the leading manufacturers of kitchen knives globally. In recent years Japanese knives have become increasingly popular among ordinary consumers and professional chefs. Even well-known European brands are developing entire series of products in the Japanese style. Let's figure out why these blades are so attractive and how they differ from those made in Germany.

Since ancient times, the Japanese have treated melee weapons with particular trepidation, striving to achieve the maximum sharpness of the blade. The craftsmen had a wealth of knowledge and experience in creating katana swords; they spent many months and even years making one copy. The secrets of production and sharpening were passed down from generation to generation; there were whole dynasties of masters in sharpening and finishing the blade. Excellent sharpness was achieved primarily due to high hardness steel, the multi-layered blade, and its sheet-like shape.

According to an ancient legend, one such master stuck it into the bottom of a forest stream to prove the extreme sharpness of the sword. Leaves from the trees fell into the water and fell with the current onto the blade, easily splitting into two parts. Manufacturing traditions and a respectful attitude to knives have been preserved in Japan to this day. The sharpest and most durable blades are made in Japan today.

As for the European countries, they paid more attention to swords in the Middle Age, to thin blades pointed only at the tip. The philosophy of using melee weapons is entirely different, more focused on the piercing properties of the rapier than the cutting features of the sword.

The traditional Japanese blade differed from the European one-sided blade sharpening and a massive blunt end, reaching 10 mm in thickness. If you look at the blunt end of the knife, turning it with the handle towards you, then the left side of the blade has a concave shape. The German knife always had a double-sided "straight" sharpening at a large angle - about 30-45 degrees- made from "soft" types of steel.

In the 20th century, Japanese companies entered the world market and faced competition in German knives more familiar to Europeans. Then the enterprising Japanese developed models that combined the positive qualities of the "Germans" and Japanese traditions. And they did not lose. From the European model, they adopted:

• the small thickness of the blunt end;
• double-sided blade sharpening;
• metal bolster;
• the handle is an overhead type

But they left the Japanese high-carbon steel, the blade's sharpening at a minimum angle of 10-25 degrees, the traditional oriental forms of knives. The wedge-shaped blade made from hard steel with a slight sharpening angle ensures optimal cutting properties of the knife. It makes Japanese knives better than ordinary ones. Premium models are even made of multi-layer Damascus steel, which has no competition in the whole world. In this design, the Japanese knife has taken the leading position in the market and has retained them for several decades.

Today, most European manufacturers produce knives industrially through automatic production. It is profitable; however, you get knives, the end cut of which looks like a triangle with concave sides. It negatively affects the geometry of the blade. With intensive use, the angle of convergence of the point increases even more; when cutting, more and more efforts have to be made, the blade becomes dull more and more often, begins to crush the product, and not cut. Consumers are forced to buy new German knives over and over again. So it is not in the interests of producers to supply the market with a tool that would serve for decades.

The Japanese approach to the knife business is fundamentally different. It honors a professional tool. Its mentality is based on taking care of the end consumer, so they create high-quality kitchen knives that can be inherited. In part, this approach was the key to their success in the global market. Thanks to the manual labor of straightening and sharpening the blade, it is possible to create an end cut in the form of a wedge with straight sides. By working on the correct geometry, Japanese manufacturers are investing more in products, so the cost and volume of the production are lower than those of Europeans. However, they bring top-quality products to the market, both in economy and premium categories.

At the same time, the Japanese respect the tool itself and suggest carefully following the rules of care, operation, and storage so that the knife remains sharp and serves for many years faithfully. What to choose - Japanese or European kitchen knives? It's up to you to decide, but, in our opinion, the choice is obvious.
TAGS