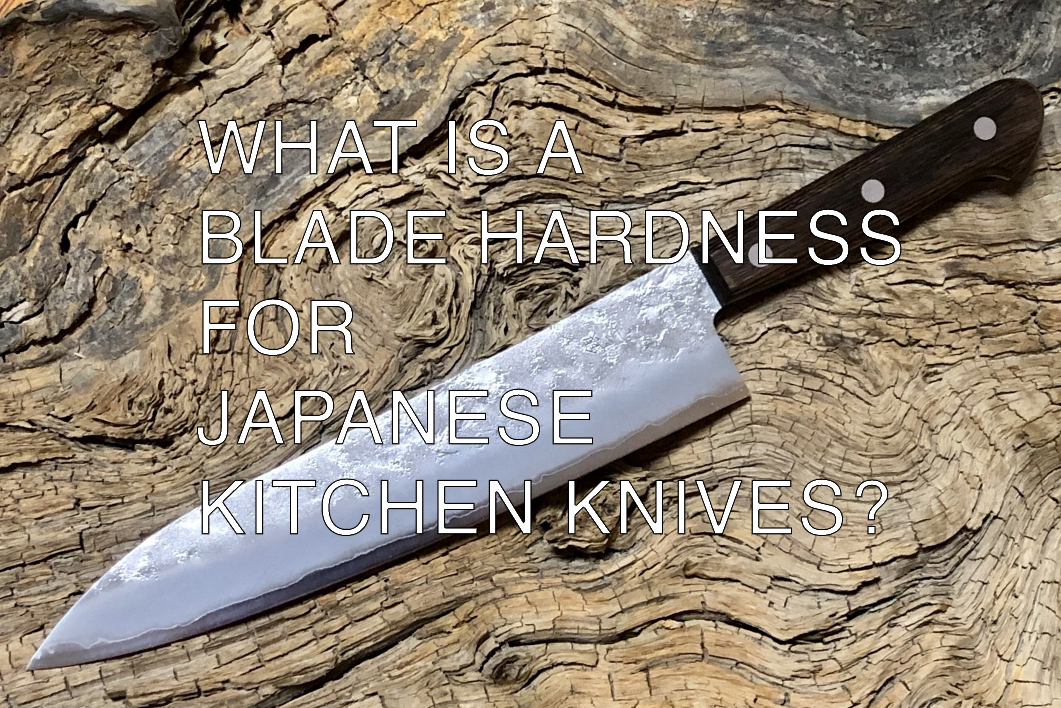 What is a blade hardness for Japanese kitchen knives?

Why blade hardness is important?

The meaning of Hardness in physics is a measure of the resistance to localized plastic deformation induced by either mechanical indentation or abrasion.

In the knife industry, it is most advantageous if the blade is able to remain sharp for a long time (not deform, crumble or dull), be resistant to side loading, but still accept manual sharpening when using a right tool.

Blade that is too hard can break when in contact with bones or frozen meat and sharpening it with your own hands will be problematic - the metal will not succumb to the influence of a grinding tool.

In other hand, too soft steel, on the contrary, will crumple in contact with the surface of a dense product and will need to be straightened (knife honing). It is not difficult to give the correct geometry, but the next deformation will not be long in coming. As a result, the knife will have to be edited and sharpened too often, and the cut quality will be very mediocre.

There are several ways to determine the hardness of metals, but the Rockwell method is considered the most popular for the category of kitchen knives. The authors of this method, the Americans Stanley and Hugh Rockwell, patented the technology in 1914. In the future, only Stanley Rockwell was engaged in the improvement of his hardness tester.

According to this method, the hardness index is designated HRC, where HR means Hard Rockwell (Rockwell hardness) and C is the marking of the steel hardness scale (there are 11 in total). On the Rockwell scale, the hardness can be 27-70 units. The higher the value, the harder the blade.

In the process of measuring the hardness, a preliminary and then the main load is applied to the workpiece, fixed on the hardness tester. The results are recorded and then the specialist makes the necessary calculations to determine HR (calculate the difference between the main and preload).

What is the optimal blade hardness for Japanese kitchen knife?

The main component of steel that ensures the hardness of the blade is carbon. The higher its share, the higher the HRC. Hard blades remain sharp for as long as possible and will have to be sharpened less often than from mild steels. To protect against corrosion and increase the strength of high-carbon steel, additional elements are added to the alloy: chrome; molybdenum; vanadium; manganese, etc.

But it does not mean that harder blade is better. It always depends on blade geometry and what steel are used (two different steels at the same hardness will have different vulnerability to chipping, edge retention and etc.) Also what is knife owner cutting styles is (slice, push, chop, ) and other things like a cutting board and etc.

And this is usual hardness for most Japanese kitchen knives (Typical European knife has a much less hardness. Around HRC 52 – HRC 56) A blade with a hardness higher than 66 HRC, may be too brittle. However, some highly specialized Japanese knife models (Fish slicer like Takohiki made from ZDP189 more then 67,5 HRC) have the hardest and thinnest cutting edge. They fulfill their function perfectly, but are not suitable for other jobs and require delicate handling.

For general use at the kitchen, our recommendation for Japanese knives around 59 Hrc - 63 Hrc hardness.