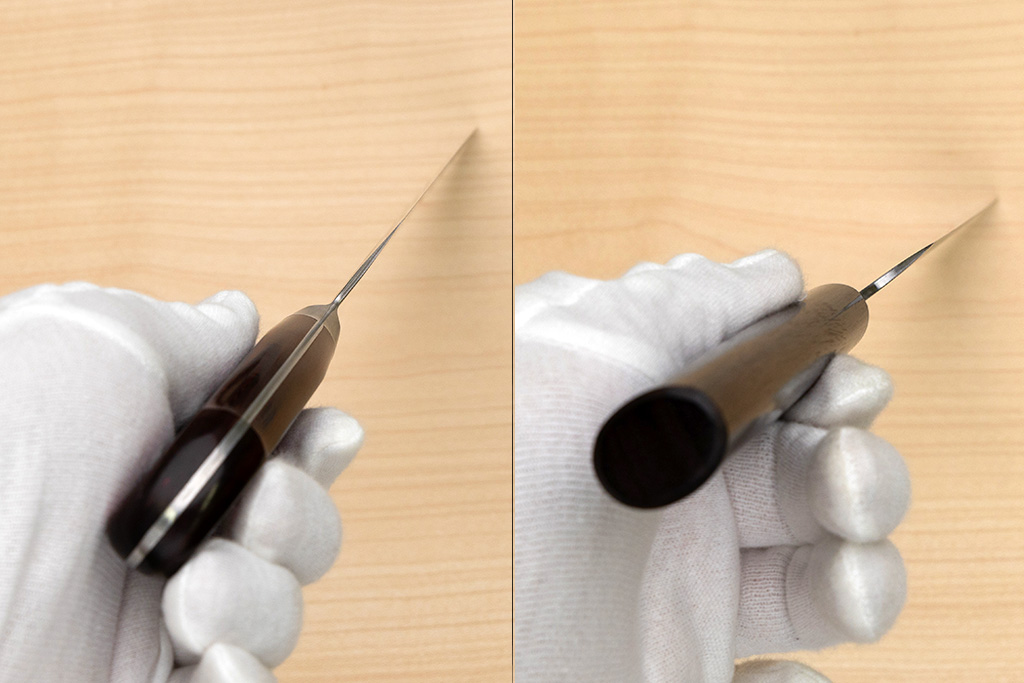 WHAT IS THE SHARPENING ANGLE FOR KITCHEN KNIVES

Even the most expensive and high-quality knife once loses its original sharpness and requires sharpening. You can return the lost sharpness to the instrument on your own at home, but you will have to consider several nuances. It is not enough to move the blade over the whetstone. If you sharpen it incorrectly, you risk ruining the cutting edge or dulling it even more. Before starting work, it is essential to determine the correct sharpening angle of the knife and observe it during all manipulations to sharpen the blade.

You don't need to be a great physicist to understand that the thinner the cutting edge of a knife, the higher its cutting ability, the more convenient it is to work with a knife. The design features of the knives are such that the smaller the angle between the arches of the blade, the smaller the area of ​​contact with the product. When planning to determine the correct sharpening angle of a kitchen knife, you need to assess the degree of convergence of the inlets. These are the areas of the blade where the downsides of the knife merge into the cutting edge.

The angle of sharpening of kitchen knives cannot be universal. It depends on:

The origin of the knife may also matter. So, the Japanese produce blades with one-sided blade sharpening at a minimum angle, up to 15 degrees. Europeans are not inclined to such a filigree cutting edge processing; therefore, they are often limited to 30 degrees. Japanese brands also produce Europeanized models with a classic double-sided sharpening, but they are true to themselves to make the sharpest and highest quality tool possible. Therefore, even such models have a minimum sharpening angle of 15-25 degrees.

In addition, the "Japanese" have ideally straight sides of the cutting edge triangle when viewed from the end. Perfect geometry is achieved through the use of manual labor for the final sharpening. For "Europeans," the sides of the triangle are concave since the sharpening is done automatically. This indicator affects the quality of the cut and the service life of the knife. The concave cutting edge grinds off faster, and the knife has to be replaced with a new one.

A large sharpening angle is for ceramic knives. This material is very brittle, so manufacturers usually sharpen the cutting edge at a 40-degree angle. It does not affect cutting properties as the blade is very hard and hardened at extremely high temperatures and then sharpened on diamond stones.

WHAT IS THE CORRECT ANGLE FOR KNIFE SHARPENING

In time, it is worth knowing the angle of sharpening of a new product, which the manufacturer sets. During the operation of the knife, the angle may change, and it will be problematic to guess what it was before. You can determine the sharpening angles of different blades in the following ways:

DEVICES FOR SETTING THE ANGLE OF SHARPENING OF THE KNIFE

Once you understand the angle of the cutting edge should be, it is worth thinking about how you plan to maintain it when sharpening the tool. Experienced craftsmen set the knife in the correct position relative to the sharpening bar by eye, guided by honed dexterity. An inexperienced user may need a knife sharpening guide - an angle holder. This device allows you to fix the blade relative to the sharpening tool in the desired position. It is attached to the butt of a knife. Automatic and electric sharpeners may have a built-in angle holder adjusted from 15 to 45 degrees.
The ideal knife sharpening angle corresponds to the purpose of the tool and its design features. With the correct sharpening of the blade at the right angle, the tool regains the lost sharpness and again becomes a functional assistant to the cook.